Food & DrinkThings To Do

The opportunity to enjoy the richness of duck, venison and other game meats or the bold flavours of a rib-sticking beef or lamb casserole is one of the great compensations of the wintery weather. And nothing goes with these hearty meals better than a Hawke’s Bay red wine.

The best Hawke’s Bay wines made from traditional Bordeaux varieties or syrah are world-class.

It is simply a fact that the top echelon of reds emanating from Hawke’s Bay can stand in the company of the best full-bodied reds in the world. And it is another simple fact that the benchmark examples of the styles Hawke’s Bay winemakers seek to emulate remain those of Bordeaux and the Rhone Valley in France.

Hawke’s Bay has been very fortunate to experience a brace of outstanding vintages recently. 2013 is considered by many to be the best vintage ever (heard that before??), but the wines of 2014 may yet challenge that assessment. And the 2015 vintage is shaping to be another outstanding year – if not quite so universal across styles.

Virtually all the top 2013 reds and some of the best from 2014 have been released. For everyday wines, the rule of thumb over the last 18 months has been “If it says 2013 and ‘Hawke’s Bay’ on the label, buy it”. Most wines from that year have now disappeared from the supermarket shelves. But with the later release of the ‘Super-Premium’ heavy-hitters of the vintage, many – along with some from 2014 out there – are still available in specialty wine outlets. Of course, to drink them any time soon would be to commit infanticide. But we won’t tell if you won’t!

A bunch of the very best

If you get the chance to sample, or better still get your hands on, any of the following magnificent Hawke’s Bay reds they’ll certainly reward you down the track. They are amongst the finest red wines ever produced in New Zealand. These aren’t every day wines. Care for them and love them as you would your own children. They’re THAT good!

Some commentators believe this to be the finest merlot yet produced in New Zealand. ‘Nuff said!

Great fruit weight and yet elegant. After 18 months in bottle it’s emerging as a magnificent wine.

A tiny percentage of both malbec and syrah in this blend adds to its delicious complexity. The latest in a line of fine ‘Brokenstone’ merlots.

Only the seventh release in 14 years, the 2013 syrah from this prestigious label sings of the Northern Rhone. Massive depth with impeccable balance.

The Bullnose vineyard on the Bridge Pa Triangle always produces syrah of great finesse. Never more so than in 2013.

By world fine wine standards the NZ$60 price tag is an utter bargain. One of the wines of the vintage. A seminal wine for Villa Maria – and that’s saying something.

Over the years John Forrest and Bob Newton have produced many excellent wines under the Cornerstone name. This is a fabulous step up for Dr Forrest’s premium label.

Another thoroughbred from this stellar Hawke’s Bay syrah stable. The structure of Le Sol grows more elegant each year. Stunning poise and potential.

And what a legacy it is. This Vidal flagship is one of the very best syrahs every year. Is the complex and vibrant 2014 the best yet?

Another relative bargain. The aromatic magnificence of this wine will excite you long before the glass reaches your lips. Fine cabernet sauvignon by a master producer.

If ever a Hawke’s Bay wine deserved the over-used label of ‘Iconic’, Coleraine is it. The truly gracious 2013 exudes subtlety and elegance. Stylish!

These are just a handful of the superb reds produced in the 2013 and 2014 vintages, let alone the 2015 wines only now emerging. They are selected for their outstanding quality and because they’re all made by wineries with reasonably wide distribution.

Top tip for finding more hidden Hawke’s Bay gems: The only way to experience the smaller, lesser-known premium producers of Hawke’s Bay is to visit their cellar door.

A wine tour with Bay Tours will take you right to where it all starts – with an experienced local to guide you. Enrich your visit to our beautiful region with some time amongst the vines.

What could be greater fun on a cool, clear winters day in Hawke’s Bay? 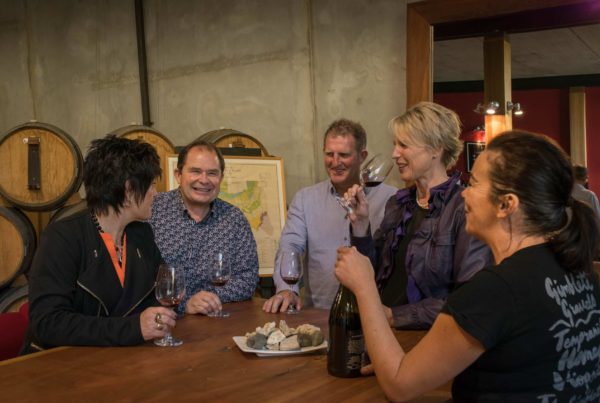